Home › comedy › Too Saggy for the SAG Awards: Book Excerpt

Too Saggy for the SAG Awards: Book Excerpt 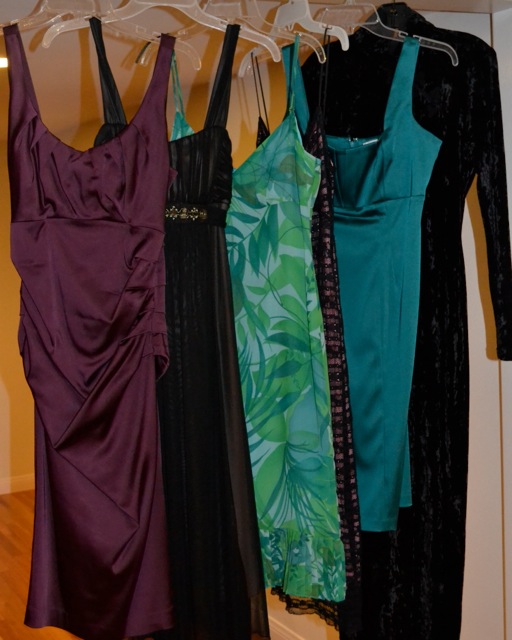 A book excerpt from Is That The Shirt You’re Wearing?

by Kristen Hansen Brakeman (me)

I had a few extra minutes to spare before leaving for my office at the Screen Actors Guild Awards, so I thought I’d try on my old black crepe suit to make sure it would look okay when I had to wear it backstage at the show days later.

When you work behind-the-scenes on an awards show, you’re supposed to dress to blend in. The production companies usually rent tuxedos for the men who might be caught on camera, but the female workers are expected to wear their own awards-show-appropriate dress. You know how so many of us have those lying around.

Well actually, from my years of working on awards shows, I do have a small collection of semi-formal wear lying around. But the problem is that most of these items are getting a little old and tired looking, much like their owner.

So I spent most of the weekend racking my brain, wondering what I could wear to this year’s show, and then I remembered this black crepe suit that I bought about 15 or 20 years ago. I wore it when I worked on the Oscars the year before my first daughter was born.

I remember thinking at the time that I looked simply fabulous in that suit. Very chic, indeed. I’m sure I even fantasized that I’d be mistaken for one of the celebs.

It’s quite possible that the other people backstage might have been thinking, “Oh, dear, the poor child,” but I was sure I looked great.

I had paid a pretty penny for it, and I remembered that it hung beautifully. Maybe enough time had passed that it had come back in style? . . Oh, if only that were the case.

As soon as I removed the suit from its storage bag, I became immediately aware that the suit in my mind’s eye looked nothing like the one I now saw before me.

Perhaps it looked better on?

First I pulled on the pants — the waistline came within five inches of my armpits. Uh oh.

“Look at mommy’s pants!” my youngest shrieked. “Ha, ha, ha,” she laughed, over and over again.

“Very funny. I know, they’re a little high-waisted, but no one will see the pants because the jacket hangs over them,” I said, trying to convince myself more than her.

I had my doubts. The pant legs were quite wide. Really, you could fit two of me in those pant legs. But, maybe wide legs are back in? Didn’t I read that somewhere?

I put on the blazer, buttoned it and looked in the mirror. Hmm.

I looked nothing like the glamorous girl of my memory. Nope. Instead, I looked absolutely ridiculous.

The blazer, with its giant shoulder pads, hung on me like it was three sizes too big – like David Byrne in that old Talking Heads video.

I walked into the den to show my husband. “What happened?” I asked. “Do you think this suit always looked this bad? I don’t understand. Why is the coat hanging on me like it was meant for a linebacker?”

I was genuinely baffled.

“It’s because you used to have a chest,” my husband explained, matter-of-factly.

Here I thought I was lucky to have kept my weight down to what it was before having three kids. But I see now that even though my weight is the same, it has somehow shifted within my body. Unfortunately it shifted south, far from where it was needed to help this clearly out-of-date suit.

It was a horrifying realization.

“Should I bother keeping it? Do you think it’s ever coming back?” I asked, standing there looking like a clown, a clown that wears black crepe suits.

“Oh, honey, that suit is never coming back,” he declared. “You’re never gonna make that work.” Suddenly he was Tim Gunn, apparently.

So, it’s back to the closet.

I wonder if that green nylon wrap-dress would still fit?

I’m pretty sure I read somewhere that wrap-dresses are back in. Right?

2 comments on “Too Saggy for the SAG Awards: Book Excerpt”